Kind-hearted Brits are happy to pay 10 per cent more for a pint to help the hospitality sector.
6 in 10 Brits of us are ‘dreading’ winter due to the Covid restrictions, worrying it will be harder on their mental and physical health than ever before.
Shoppers have revealed the formula for the perfect 2020 Christmas advert
Lockdown to blame for our ongoing pain!
I Predict A Riot..
TNA Champion Moose speaks With Lee on the Road to Bound For Glory
It’s official – dancing really is the best medicine!
Impact Wrestling Announces NEW TV deal in UK.
Victory Road Comes to IMPACT PLUS.
Impact Wrestling Delivers Surprises at Slammiversary

Classic Concerts to Air in UK for the Very First Time.

Don’t miss your music fix this summer – there might not be a festival season but AXS tv are coming to the rescue of music lovers as they have announced a schedule of classic concerts which will air in the UK for the very first time next month.

Every Saturday and Sunday at 4pm some of the BIGGEST names in music will be showcased as part of ‘Soundstage’.

AXS tv is labelled as Showcase on Sky Channel 192 and is on air weekends from 4-6pm, as well as Wednesday and Friday between 7-9pm where the rocking good times continue with big name interviews from Sammy Hagar and Dan Rather. Then between Wednesday and Sunday from 9pm Showcase is home to AXS tv’s sister station Fight Network – the UK and Ireland’s only TV channel dedicated to wrestling, MMA, boxing and all combat sport.

The full schedule of live concerts for July is:

Ringo Starr performs a mix of his solo work and Beatles hits including “With a Little Help from My Friends,” “Octopus’s Garden” and “Photograph.”

Mick, John, Lindsey and Stevie unite for a passionate evening playing hits from “Say You Will”, as well as “Go Your Own Way”, “Tusk” and “Don’t Stop”. The combination of harmonious delivery and purposeful melodies show why they will always remain a classic. Other hits include “Rhiannon” and “Landslide”.

Mick Fleetwood, John McVie, Lindsey Buckingham and Stevie Nicks unite for a passionate evening playing hits from “Say You Will”, as well as “Goodbye”, “Gold Dust Woman” and “Tusk”. The combination of harmonious delivery and purposeful melodies show why they will always remain a classic. Other hits include “Silver Springs” and “Don’t Stop”.

With trademark Gibson “Lucille” settled on his lap, B.B. King is in his element in this unforgettable performance. Filled with staggering guitar jams on hits like “Thrill Is Gone” and “Let The Good Times Roll,” the 12-song set also includes appearances by special guests Terrence Howard, Solange and Richie Sambora, who stop by to perform with and pay tribute to the renowned blues master.

The incomparable Tom Jones takes the stage to perform repertoire from across the range of his long and illustrious career. This performance features songs from Jones’ recent, critically-acclaimed albums as well as a selection of his iconic hits that takes the audience on a musical journey across the eras and musical spectrum. In this special performance, he collaborates with noted artist Alison Krauss for a few beloved songs such as “Opportunity to Cry,” “Raise A Ruckus,” and “Didn’t It Rain.”

Filmed in the intimate surroundings of New York’s famous Roseland Ballroom, this is a real chance to get up close and personal as Phil Collins faithfully recreates the soul and Motown classics that he loved as a teenager.”

Stevie Nicks unleashes a powerful set at the legendary Red Rocks Amphitheatre in the 1986 concert film STEVIE NICKS: ROCK A LITTLE. The night features guest appearances by Mick Fleetwood and guitar mastermind Peter Frampton, and performances of Nicks’ signature solo tracks “Edge Of Seventeen,” “Talk To Me,” and “Stand Back,” as well as the beloved Fleetwood Mac single “Dreams,” among many others.

Impact Wrestling Heads to AXS tv in US

Medd in the Morning – Single of the Week: Bon Jovi – Born Again Tomorrow 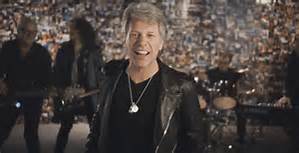